In 1892, Liverpool Football Club has been formed in Merseyside, the city of Liverpool, at the Anfield stadium. In 2017, the franchise celebrated its 125 anniversary. To immortalize this occasion, the club issued commemorative kit. Specifically, this meant an all-black wearable collection, which the kit manufacturer of the club – New Balance – calls Pitch Black. At the forefront of this collection was the Pitch Black Elite shirt, which was based on the home kit of Liverpool of 2017-18 season.

The main collectible item of the 125 year jubilee was the Pitch Black Elite shirt that was released in 2017. Part of a larger Liverpool collection made especially for this anniversary, it was a close copy of the club’s home jersey of the 2017-18 season. Unlike the match shirt however, this one – as the name would suggest – was fully black. 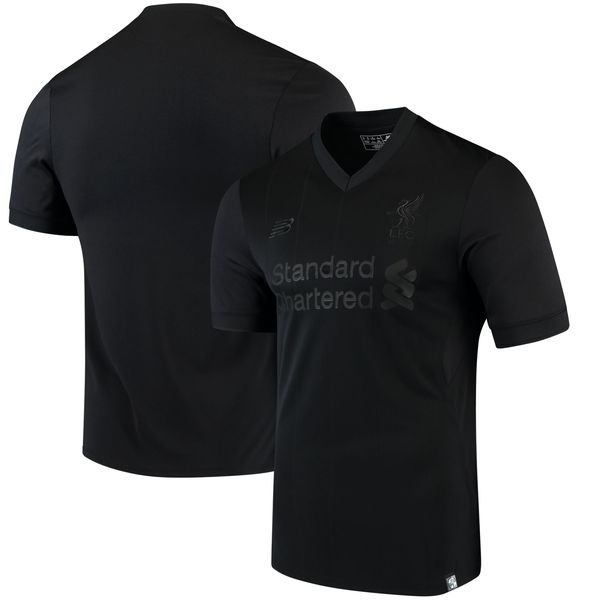 The shirt features a v-neck and has a slim fit design. On its front, embroidered in black thread is a special anniversary crest of Liverpool FC which was made specifically for the 2017-18 season. The logo of the shirt manufacturer – New Balance – is also present, as is the lettering of the sponsor. A thin stripe on each shoulder features the number 125. High performance, the jersey is packed full of New Balance sportswear innovations, including bonded vents and zonal meshes for extra cooling, moisture-activated laser cuts that open in response to increased perspiration, as well as the so called zonal mesh structures, which are designed to provide a more supportive fit. A pin stripe pattern can be seen at the front, while the back is even and smooth. 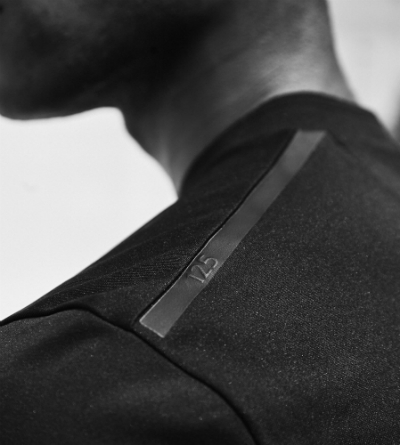 Most importantly, the shirt is a commemorative, limited edition item. It’s a pricey one, for sure, but it looks very sleek and was made only for this one moment in history. It’s very stylish and has been received well by the fans. It is part of a wider Pitch Black Collection and it’s a one of a kind item with limited quantity. It has been chosen as the commemorative centerpiece of Liverpool’s 125 year anniversary and as such it has earned its status as a classic.

While still available, you can get the Pitch Black Elite shirt from Kitbag or from New Balance. Also, check out the rest of the Liverpool Pitch Black special collection.

For the year of 2017, Liverpool presented a special commemorative crest. It is featured on the Pitch Black Elite shirt, as well as the club’s home, away and third kits of that season. As pictured, the liver bird is flanked by two dates: 1892 – the year of the establishing of the club and 2017, the year of the anniversary. Underneath, in capital letters are the words “125 YEARS”. Most importantly, however, the crest is fully embroidered onto the fabric, instead of pressed on, which gives it a somewhat retro, classic feel. The crest originally featured on the match kits of the team for the 2017-18 season. It was gold on the home jersey and black on the away and third ones. 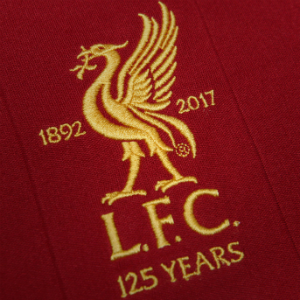 The home jersey of Liverpool for the 2017-18 season was the inspiration for the Pitch Black Elite shirt. It introduced a spectacular retro look, inspired by the uniforms of the Reds from 1970s. It featured a deeper shade of red than those of the previous seasons as a throwback to the Bill Shankly years and the great achievements of the club during his reign. The v-neck, trimmed with white lines was a nod to 1984, when Liverpool defeated Roma in the European Cup final to claim the ultimate continental trophy. Hard to spot in pictures but easily seen in person were the pinstripes on the front of the jersey, which once again bring us back to the 80s, when such elements were common. Back then they were usually white, while on this shirt they are a lighter shade of red.

The effect is impressive. The shirt was highly praised by fans upon its conception and – given its 125 year anniversary status – is becoming a collector item. The white trimming nicely accentuates the deeper shade of red and is present at the collar, the sleeves, as well as in the sponsor and manufacturer logo. The jersey has been produced by New Balance – an American sports apparel company – and it features its NB Dry innovation, which wicks sweat away from the body to the surface of the garment, where it evaporates quicker, keeping the wearer dry. At the back of the shirt, just under the collar, another Liverpool historical staple rest proudly. It’s the eternal flames that commemorate the 1989 Hillsborough tragedy.

More than just a shirt, the 125 year old home kit jersey is now a piece of history. Shortly after seeing it, the team captain of the 2017-18 season – Jordan Henderson – said “We’ll wear it with pride.” As part of Liverpool FC heritage, so will all the fans.

This classic jersey may still be available from Kitbag. Also, check out all the official Liverpool FC fan gear, including the kits for the current season.

Liverpool FC has been founded in 1892 by John Houlding, after Everton FC relocated to Goodison Park and vacated the now historic Anfield stadium. Nicknamed “the Reds” for the distinctive fully red uniforms that the team has been known for over the years, the club was promoted to the first division in 1894 and has been one of the most successful and widely known English clubs in the world.
The club has won the top flight of the English football league (currently the Premier League) 18 times, which puts it second in English history. However, it holds an English record of 5 European Cups, as well as 3 UEFA Cups and 7 FA Cups. Its most notable periods of history were in the 70s, when Bill Shankly managed the team, as well as during the years of the now legendary Kenny Daglish who eventually became the player-manager of the club in the 80s. Over the years, the club has been the home of some legendary players, including Steven Gerard, Graeme Souness, Ian Rush, Ian Callaghan, John Barnes, Kevin Keegan, Roger Hunt and Kenny Daglish himself.
In 2017, the club celebrated its 125the anniversary. For all those years it played at its iconic home stadium – Anfield.

What are your feelings on the 125 years of one of the greatest clubs in the world? And what about the Liverpool Pitch Black jersey? Let us know below.