Welcome to the Real Madrid kit history page. This is the hub for Real Madrid C.F. official game apparel, its colours and its visual history. Check the bottom of the page for Los Blancos related articles or view the club’s current jersey.

The colours of Real Madrid C.F are white. They have been adopted at the conception of the club and the team has remained faithful to them ever since. This constant has given the club its famous nickname – Los Blancos (The Whites). Consequently, the current uniforms of Real Madrid are white, with the shirts, shorts and socks all of the same colour. During away games, the team currently plays in all gray uniforms, embellished with white trim. In the rare instances that the third kit is used the team takes the field in bright red apparel with a subtle over graphic print of darker shade of red on the jerseys. 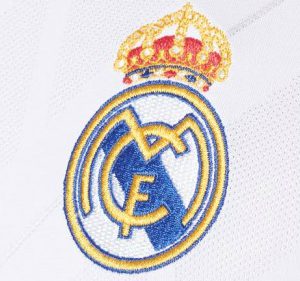 The crest of Real Madrid is a gold circle on a white background. Inside, arranged to complement the round shape are the letters M, C and F. They stand for “Madrid Club de Fútbol” and are written in gold. A blue stripe (once purple) crosses the inner circle from the left down to the right, representing the Region of Castille. The crest is topped with a crown, given to the club in 1920 by King Alfonso XIII, from which the side derrives the title Real (Royal). As common in crests of professional clubs, the colours used have a special significance. Gold represents tradition and excellence, blue represents grace, while red stands for passion, determination and the club’s royal roots.

Real Mardid is one of a few teams in professional football today to still play in their original home colours chosen at conception. The club was founded in 1902 by students of Institución Libre de Enseñanza who after establishing a local football society split from the original group two years later and left to start their own team. The group originally named itself Madrid Football Club and played in all white buttoned up uniforms with fashionable collars. Their shorts were equally white while their socks were black. Their club logo soon appeared proudly on their left breasts.

Starting on its road to fame, the Madrid Football Club won its first title in 1905, defeating Athletic Bilbao in the Spanish Cup final, and on January 4 1909 it became one of the founding teams of the new Royal Spanish Football Federation. King Alfonso XIII officially granted the club the royal designation in 1920 and the side became forever known as Real Mardid.

Throughout the years, the home kit of the team kept its original colours – all white with black socks. While other clubs experimented with designs, Los Blancos (as they came to be known) have maintained their visual identity. This speaks loudly to the club’s spirit and is often a source of pride among Real fans. The early uniforms were relatively tight fitting with elegant collars and shirts that could be laced up at the neck.

Yet even Los Blancos were not immune to visual experimentation – if only once. In 1925, wishing to emulate the then famous Corinthian F.C. side from London, the club owners adopted black shorts for the team. For just one season the Madrid aces played in white shirts and black shorts but a loss to Barcelona in the Spanish Cup and subsequent elimination from the tournament convinced the club president that the new colours brought bad luck. The following year, Real Mardid took the pitch in white uniforms and black socks once again. Those proved to restore luck by the early 30s, when Real won its first league title in 1932, repeating the feat the following year – the first team to do so. It was also in the 30s when the name of the club returned to Madrid FC, after the rise of the Second Spanish Republic. Their colours, however, remained unchanged.

In the 1940s, Real Madrid continued its domestic excellence. In 1947, the team introduced two versions of their white shirt, one with short sleeves for the summer and one with long sleeves for the winter. Renamed back to Real Madrid, the team was the first club in Spain to wear numbers on the back of their shirts. Yet it was the 50s that brought the white jerseys of Real Madrid fully to European attention. Introduced in 1955, the European Cup (precursor of today’s Champions League) saw domestic winners of all major European leagues pitted against each other in a yearly contest. Between 1956 and 1960, Real Madrid won the Cup five consecutive times, establishing its dominance in continental football. The white shirt now reigned supreme.

The final evolution of Real Madrid kit occurred in 1955, just before the first European Cup success of the club. It was in that year that the socks changed from black to white and have remained so ever since. For decades after, the snow white kit of Madrid has only been embellished by sponsor lettering, manufacturer logos and trim design elements. The first of those came in 1982, when Adidas was chosen as the first kit manufacturer of Los Blancos and the three Adidas stripes frequently appeared on the shirts and shorts, usually in blue, purple or black. Hummel took over as the kit partner in 1985, Kelme in 1994 and Adidas once again in 1998. To see the club’s current kit, click here. 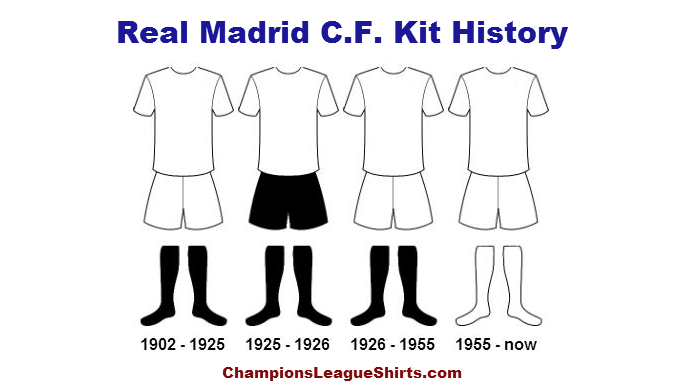 In contrast to the home kit, the away uniforms of Real Madrid have changed colours over the years. In the early days of the club they were almost exclusively all purple or blue. This design philosophy continued till the late nineties, when black kit began appearing in almost regular intervals every two or three seasons. In contrast to the relatively monochrome attire of the early decades, the away uniforms became more and embellished with trims and visuals, often featuring stripes or patterns of white. This was in line with the changes in football shirt philosophy all over the world, as new printing technologies and styles facilitated more elaborate designs. In 2008, the black hues took over and the second kits of Los Blancos were almost uniformly black from season to season till 2013.

Despite the philosophy of sticking to blue, purple and black for their away colours, Los Blancos did have a few exceptions in the recent years. The most notable of those were the 2014-2015 now famous pink kit (marketed as fuchsia) and the 2015-2016 light gray uniform which doubled well as street wear and is popular to this day. Their current second kit is once again gray – although on the darker side – with white sponsor lettering.

The first logo of Real Madrid started as a monogram. Three letters – M, C and F – were superimposed over each other in blue ink. They stood for Madrid Club de Fútbol (the name of the Spanish side at the time) and quickly found their way onto the shirts of the players. There, they were embroidered on the left breast in a fairly large size.

The first redesign of this emblem came in 1908, when the three letters were put in a circle. Their style changed as well to complement the roundness of the design and to give most prominence to the letter “M”, instead of “C”. This new logo was also blue and figured on white background. In 1920, it received an addition – a royal crown. This was the year when King Alfonso XIII granted the club his royal patronage and Madrid Club de Fútbol officially changed its name to Real Madrid C.F.

With the coming to power of the Second Spanish Republic and the dissolution of the monarchy in 1931 the club lost its Real moniker, returning simply to Madrid Club de Fútbol. Along with this change, the crown was removed from the logo and a purple band of the Region of Castille was added to it for the first time. This was the fourth version of the logo since the club’s conception and the last one to feature blue lettering.

By 1941 the Spanish Civil war was already over. That year, the club regained its royal heritage and became Real Madrid again. The club emblem underwent a significant change and assumed the style of the crest that we know today. For the first time in the club’s history it was in full colour. The crown returned – now in red and gold – but the band of the Region of Castille remained. The letters and the circle were also fully gold. Since then, only minor cosmetic changes to the crest occurred, most due to embroidering styles on various shirts. The purple stripe became blue in 1998 when Adidas returned as the kit manufacturer of the Madrid giants. An alternate version of the logo without the cross at the top of the crown was made in 2014 to market the team in the Middle East.

Real Madrid C.F.
League: La Liga
Home Ground: Estadio Santiago Bernabéu
Nickname: Los Blancos
Motto: Hala Madrid
Real Madrid Club de Fútbol is a Spanish La Liga club located in downtown Madrid. It is one of the three founding members of La Liga and has never been relegated from the top flight of Spanish football.
Real Madrid’s international glory started in 1950s, when the club won the newly created European Cup five times in a row. Since then, it has added to its tally and is the current holder of thirteen Champions League trophies, the most in the world. It is the only club in history to defend a Champions League title. Domestically, the club holds a record of 33 La Liga titles and 19 Copay del Rey victories. It plays its football in Santiago Bernabéu Stadium in central Madrid. 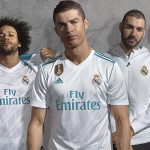 Real Madrid Uniform for 2018- Today, we take an in-depth look at the Real Madrid uniform for 2018 - the battle gear of one of world most elite football clubs in the world. For a number of years Los Blancos have been dominating football venues all over the world. After their grand achievement of "la decima" they battled to add two more Champions League trophies… [...] 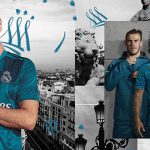 Real Madrid Football Kit – 17-18 Third Shirt Revealed- Adidas, the official sponsor of the Real Madrid football kit, has revealed the third shirt for the Los Blancos 2017-18 season. It is blue/teal in colour and it was designed by the Real fans from around the world.   Real Madrid Football Kit - Third Shirt Borrowing from the accents of this year's Madrid first jersey, the new shirt is… [...]
Tweet
Share
Pin1
+1
1 Shares