Welcome to the Tottenham Hotspur kit history and club colours centre. This page is the hub for the past and present Spurs apparel information. Check the bottom of the page for more related articles or view the club’s current kit.

The Tottenham Hotspur F.C. shirt – the famous lillywhite jersey – is white. It held this colour for over a century and while sponsor branding and occasional small decorations change from season to season, the pure white complexion of the shirt gives the club its identity. The jersey is paired with dark blue shorts and white socks, which have held their hues since shortly after the club’s conception and are not likely to change any time soon. This white and dark blue pairing defines the north London club and forms the official colours of the team. During away games in the English and Champions League fixtures, you will also see the Spurs wear darker colours which will vary from season to season. This “second kit” is usually monochrome and varies from blue to yellow and even purple, depending on the season. 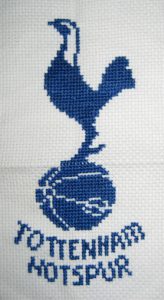 The Tottenham Hotspur F.C. badge is dark blue and consists of two design elements. The first one is the left-facing Cockerel- a young, fighting rooster. The inspiration for this image is reported to come from Harry Hotspur from whom the club is said to have taken its name and who was an enthusiast of fighting cocks which he outfitted with riding spurs. The Cockerel is standing on a historical ball from year 1909 and in its current rendition is sleek and elongated, with a white head. Riding spurs can be seen attached to its feet. The second element of the club badge is typography, reading “Tottenham Hotspur” which is curved and placed underneath the image. The font was specifically created for the club. On the club shirt, the badge appears without the lettering.

Tottenham Hotspur F.C.
League: English Premier League
Home Ground: Wembley Stadium
Nickname: Spurs, the Lilywhites
Motto: Audere est Facere (To Dare Is to Do)
Formed in 1882 Tottenham Hotspur Football Club (commonly refereed to as Spurs), is an English Premier League club located in north London. It is one of the premier clubs competing in both the English and the Champions Leagues. It plays its football in the Wembley Stadium, after moving there from White Heart Lane in 2017.
Its first moment of glory came in 1901, when Tottenham became the only non-League club to win the English FA Cup since the formation of the English Football League. In 1961, the Spurs were the first club in the 20th century to achieve the League and the FA Cup Double. The club has won the English Permier League twice (1951 and 1961) and the FA Cup eight times (1901, 1921, 1961, 1962, 1967, 1981, 1982 and 1991). Internationally, Spurs were the first English club to win a UEFA competition – the European Cup Winners’ Cup in 1967. They were also the first winners of the UEFA Cup (now Europa League) in 1972. Tottenham is known as one of only two English clubs to win a major trophy in each of the last six decades (along with Manchester United).

The Tottenham home kit design has gone through quite a revolution throughout the early years of the club and was quite different from the snow white shirts that Spurs are known for today. The club started playing in navy blue jerseys with a red “H” on the left breast in the first years of their existence but switched quickly to a “quartered” design in 1884 after watching the Blackburn Rovers win the FA Cup Final in such apparel. This new “quartered” kit retained the navy blue socks and white breeches but featured two-colour shirts – white on the right side of the chest and light blue on the left. The sleeves back then were almost always long and frequently rolled up by the players during the hot summer days.

This quartered uniform lasted just a few years, till in 1890 it was revamped completely once again. Red shirts, navy blue shorts and white socks were introduced instead. It’s hard to imagine today seeing the Spurs in red apparel at home, especially given their proximity to Arsenal, but for nine years from 1890 to 1896 that is exactly what they wore.

Yet even that design was replaced when Tottenham became a professional club. And once again, the changes were far from subtle. Between 1896 and 1898 the Spurs now played in thinly striped, chocolate and gold jerseys. Accompanying those were navy shorts and socks. This kit marked however the last years of bright colours for Tottenham’s home games. Two years later, in 1898, just a year before the club moved to the White Heart Lane, the Spurs home uniforms went through their final evolution and became the white and navy blue uniform of Tottenham Hotspur we know today. To see the club’s current kit, check here. 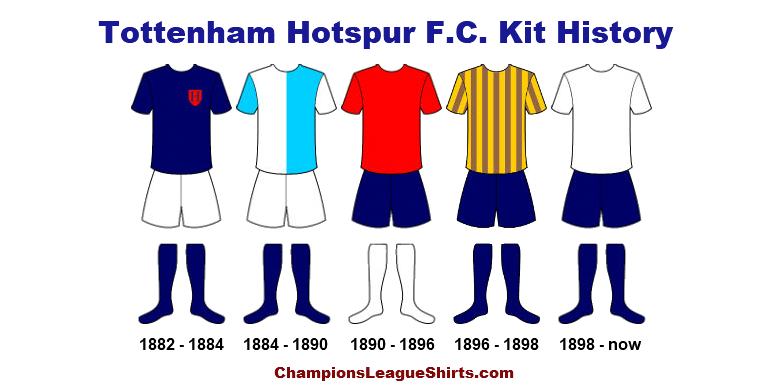 Since then, Tottenham retained its now famous lillywhite shirts, decorating them for special occasions with touches of yellow or light blue. The club’s away kit however, followed a much more turbulent history and never settled on one design. It has been changing quite drastically over time. In the early days of the club it often featured thin vertical striped shirts (usually navy blue and white or red and white) and navy blue shorts. Horizontal stripes were used as well in the twenties and thirties, those almost exclusively navy blue and white. Yet in the mid 40s that design philosophy changed and the club moved to using the mirror image of their home uniforms – navy blue shirts and white shorts for their away games till the end of the 60s. At the end of that decade, the dark blue shirts were then banned by the English League, as they clashed with the referee outfits.

The 70s saw Tottenham play away games mostly in yellow, including socks, while the 80s were the era of light blue kits form head to toe. The new, then innovative shadow-striped design was present on the fabric in those two decades. With the arrivals of the 90s, however, all uniformity was abandoned. Ever since then – and still today – the away kit of Tottenham seems to change from year to year. It is usually monochrome but it varies from dark blue to black, to light blue, to purple or even yellow, depending on the year. No doubt, the changing kit manufacturers or sponsors have something to do with it, but as the home uniforms of Tottenham Hotspur Football Club have remained the same for over a century, the away kit of the same club has been a veritable fashion show.

The Spurs badge has gone through several re-designs but it reportedly started with just a capital letter “H”. The letter – first white on a red shield and then just floating without a frame – identified the club till 1921. That year, a dark blue cockerel on a white shield with a dark blue frame was born. It was worn on the left breast. It coincided with the club winning its second FA Cup and was believed to bring good luck. This design lasted till 1930, when the crest was modernized and reportedly changed to black. It lasted in this version over the war period, till 1951. It was in that year that Tottenham Hotspur won its first First Division title and as if to celebrate this achievement it redesigned its logo once again. An elongated form of the dark blue cockerel was introduced and this styling element remained in use ever since.

The next two badge redesigns were in 1966 and 1977 and featured the cockerel standing on the ball for the first time. The shield outline was dropped, freeing the bird to meet the world. The ball, originally generic, become “Victorian-style” in 1977 and retained this look ever since. In 1982 – the club’s centennial year – the logo was suitably embellished with letters and after it proved to be too easy to copy (illegal pirate replica jersey market was booming and the Spurs were one of the victims), it was expanded with English lions in 1983 and for the first time presented in colour. The club motto “Audere est Facere” was added underneath.

The subsequent two badge redesigns were not received with enthusiasm and each crest lasted only two years. The first one – in 1995 – saw the return of the shield around the cockerel and the second – in 1997 – was an elaborate coat of arms that featured some local landmarks of importance to the club. Since neither badge was popular, the 1983 version was re-introduced and stayed till 2006, when the current version of the logo was introduced. In 2017, this crest was encased in a shield, to pay homage to the 1961 Spurs team which was the first one to win the English League and the FA Cup in the same year. 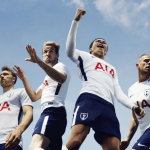 Tottenham New Kits- After much speculation and several exciting leaks, Tottenham new kits for 2017-18 have been launched.   Tottenham new kits - Overview: In contrast to last few years, they have been designed by Nike - the new kit sponsor of the club - and constructed using their proprietary technology. Gone are the blue "shoulder pads" of last year in favor of a… [...]
Tweet
Share3
Pin4
+11
8 Shares