Welcome to the PSG kit history page. This is the hub for the Paris Saint-Germain official game apparel, its colours and visual history. Check the bottom of the page for PSG related articles or view the club’s current kit.

The colours of Paris Saint-Germain are white, blue and red and have been this way since the club’s conception. In addition to representing the French flag, they also have a meaning specific to the City of Paris. Blue and red represent the city itself while white alludes to the club’s historic roots in Saint-Germain-en-Laye. All three colours are represented in the home kit of the team, with fully dark blue uniforms, red embellishments and white writing. The current jersey of PSG is dark blue with a dark red vertical zig-zag stripe running from the front of the collar down to the hem of the shirt. White lettering rounds off the design. The team’s away kit is all white. 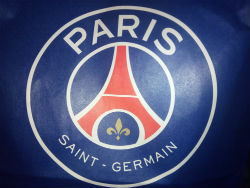 Paris Saint-Germain crest has specific significance not only to the club itself but also to the city of Paris and surrounding areas. It is blue and round with two white concentric rings. The inner ring features a red Eiffel Tower and a yellow fleur de lys between its legs. The outer ring encompasses the words “PARIS” at the top and “SAINT-GERMAIN” at the bottom. The crest is lit from the top left, flooding the circle with sunlight. On the official jerseys of the club the logo is embroidered and sewn onto the garment. A large version of the team’s crest can be seen on the sidelines in Parc de Princes – the official stadium of the club.

Paris Saint-Germain has been founded in 1970 by a group of Parisian businessmen and has a comparatively short history compared to other top professional teams in the world. Attempting to infuse the French capital with a top flight sporting presence in the country, the group merged nearby Paris FC and Stade Saint-Germain to form PSG in an era when football uniforms have already featured a modern look and have undergone years of technological evolution. As such, when Paris Saint-Germain debuted in the 2nd tier of French football, it started with a red jersey and white shorts. Adorning the top was a blue and white collar which together with the red formed the colours of the French flag. Additionally, the blue and red ware said to represent the City of Paris, while white was a homage to Saint-Germain-en-Laye – the home of Stade Saint-Germain and the location of the club’s training facilities. The red shirts were lightweight and durable and were relatively tight fitting. They were manufactured by Le Coq Sportif – an iconic French producer of activewear and sporting accessories. 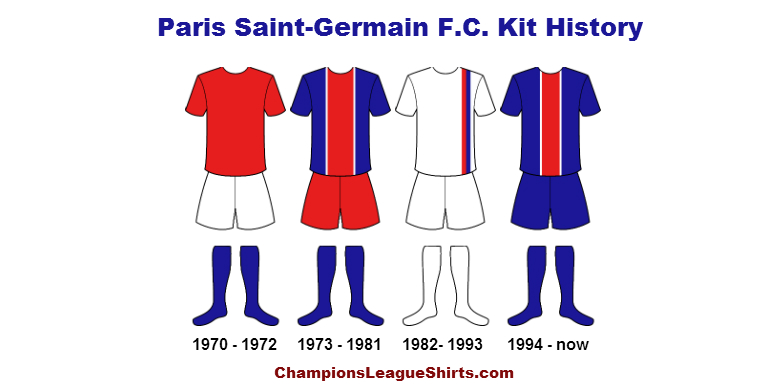 In 1972, fashion designer Daniel Hechter took over the club, becoming its president. The following year, under the guidance of the legendary player-turned-coach Just Fontaine, the club won its promotion to the first division and slowly started climbing the charts. It was at this time that the club uniform has taken its only major redesign in the PSG kit history and the first version of the current jersey was born. The new shirt was blue and featured a thick red stripe with white borders that ran from the collar to the hem at the front of the garment. It was designed by Hechter himself who later admitted to taking the inspiration for the uniform from the Dutch giants Ajax Amsterdam. Where Ajax featured white jerseys with a red stripe, PSG had blue and red instead. As such, this new iconic top has become known as the “Hechter Shirt”.

With their new home identity, Paris Saint-Germain steadily improved from year to year. In 1978, the mantle of club presidency passed to Francis Borelli – a French businessman – who begun extending the team’s lineup to include more and more stars. In 1982, on his directive, the club made a change to their on-pitch colours and swapped their away and home jerseys. For the next twelve years, the Hechter Shirt was relegated to the club’s away games while the new home jersey was all white. Over the years, it frequently featured a red and blue stripe running vertically on the left side of the body. The primary sponsor of the team – RTL – figured prominently on the chest in dark blue letters.

The white shirt proved to be quite prophetic for the Parisian team. In 1982, the club won its first French Cup and consequently participated in its first European campaign, reaching quarterfinals. In 1983, PSG successfully defended the French Cup and in 1986 they won their first Ligue 1 title. Yet at the onset of 1994 season the Hechter Shirt returned and has been the identity of PSG’s home games ever since.

Changing its sponsors to Commodore and then to Muller, Tourtel, Opel and finally Emirates Airlines, the kit was now manufactured by Nike and as the sportswear company advanced its clothing making technologies, many microfiber innovations found their way into the PSG uniforms. The shades of blue and red have also undergone changes, shifting between light and dark, often fading into navy and burgundy. The width of the red stripe varied from year to year, from thin to thick. In the early 2000s, it was offset to the left side of the chest, returning to the centre soon after. In the early 2010s it went though several variants, first split into two parallel stripes and then culminating in the now iconic 2013-2014 season design, where it was white on the top and red at the bottom. Currently, it is once again centred on the chest in one colour, but without the white border. To see the club’s current kit, check here.

The PSG away kit has been relatively faithful to its original design since its conception. It started off as white with a thin red and blue stripe running vertically along the left breast of the shirt. With a notable exception of the 1975-76 season, this design remained till 1982, when the famous switch between the club’s home and away colours occurred. As white was chosen by Francis Borelli to be the team’s first colour, the Hechter Shirt now became the second kit. PSG now played its away games in dark blue jerseys with thick, vertical red stripes on the front of their chests. The shorts and the socks varied between red and blue.

At the end of the 80s, the away shirt went through a few redesigns, mostly featuring as light blue with a white collar, till 1994 when the team’s away and home colours were reversed once more. As the Hechter Shirt once again became the team’s primary gear, the away kit then returned to its previous white with a thick, red vertical stripe on the front. It was accompanied by white shorts and white socks. It was now made by Nike and it retained this look till 1999.

In 1999 the away shirt lost its red central stripe (with the exception of 2007-2008 season) and underwent several variants, switching between gray, white, red and even reddish-brown. The first major departure in the PSG kit history from this relatively conservative palette has been in 2017 when the away uniforms suddenly turned entirely yellow. By then, the club has established a tradition of signing Brazilian talent and has promoted itself as the employer of some of the greatest starts of the Seleção over the years (Ronaldinho, Maxwell, Thiago Silva, Marquinhos, Rai and Lucas Moura). Matching the Brazilian national team colour, the yellow jersey was conceived to officially celebrate that fact and it coincided with the arrival of Neymar Jr and Dani Alves in Paris.

For a comprehensive view of all PSG shirts – season by season – check here.

The first logo of Paris Saint-Germain was a blue football with a red weasel (the symbol of Paris) replacing one of the hexagonal panels. It lasted merely two years. In 1972, the first iteration of the now famous Eiffel Tower logo was conceived and it replaced the blue ball. The tower was red, the background dark blue and in between the legs of the tower featured a fleur de lys and Louis XIV cradle – both symbols of Saint-Germain-en-Laye. In 1982, an image of Parc de Princes – the club’s home stadium – was added underneath.

In 1994, with the return of the Hechter Shirt to the home kit of PSG, the logo underwent a redesign. It was replaced by the former club shareholder Canal+ and it consisted of letters “PSG” on blue, red and and blue panels consecutively. White writing on black background underneath read “PARIS SAINT-GERMAIN”. The logo proved to be quite unpopular with the fans and under pressure from Parisian supporters the Eiffel Tower was restored the following season. This time, it had a white ring around it which featured the team’s name and the year of its conception – 1970. The ring changed to blue in 2002 in a small cosmetic redesign. Finally, in 2013, the current version of the logo was conceived. The notable changes were the large word “PARIS” at the top (to capitalize on the fame of the home city) and the lack of the Louis XIV cradle. The fleur de lys is golden-yellow.

Neymar New Look – Paris Saint-Germain Shirt- In 2017, after four years of watching him in a Barcelona shirt, we have been treated to Neymar new look. Still in blue and red, but this time with an addition of white, the Brazilian superstar signed a contract with a top Ligue 1 team and donned the jersey of the French football giants - Paris Saint-Germain. His move to… [...]

Paris Football Fan – 17-18 Paris Saint-Germain Kit Review- Today, for each Paris football fan, we will be taking a look at the 2017-2018 battle gear of one of France's most formidable armies - Paris Saint-Germain. While AS Monaco FC and other local teams have been constantly nipping at their Parisian heels, for over a decade - and arguably longer than that - PSG has been kicking some domestic… [...]
Tweet
Share
Pin
+1
0 Shares